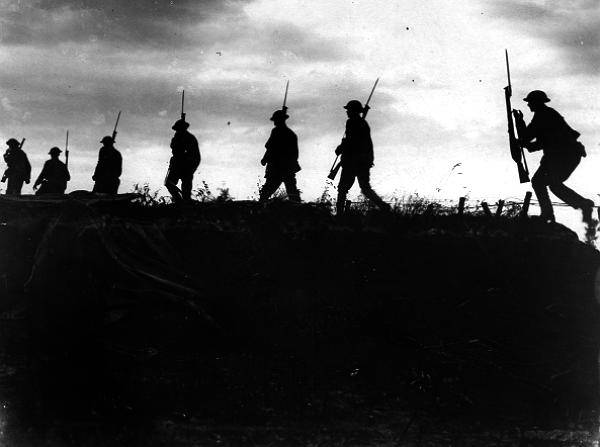 On Good Friday, 1917, Charles Stanley Lewis was in France close to the Western Front, four kilometres from Bethune. In a village he had purchased two of the pretty embroidered postcards that French women were selling to soldiers for a few pennies. Now in the trenches, Stanley wrote a few reassuring lines to his beloved family in Liverpool, left behind only a few weeks before. Nine weeks later, his brief life was over.

The Lewis family had returned from Sydney, Australia in 1892 (where Sarah Roberts and William Lewis had married in 1881) to the city of William Lewis’s birth, Liverpool. William was working as a carpenter when his two youngest children were born in Liverpool. By 1901 the family was living at 22 Rundle Road in Toxteth Park, Liverpool.

Stanley developed an interest in magic and entertained his family with his magic tricks. He became so skilful he was invited to perform at church events and parties. He acquired magician accoutrements for his routine, and had postcards printed with his portrait and stage name “Louis Charles” to hand out to his admirers.

Stanley was not quite seventeen when the First World War broke out. At that time, he had just finished school and was working as a ‘counter jumper,’ an entry level sales assistant. The Military Service Act came into effect in 1916, and conscripted young men over the age of 18 for service. It is likely that Stanley was conscripted rather than enlisted, and that he was assigned to the Lancashire Fusiliers in a Home reserve regiment that was soon to be mobilized for active service. The records that might confirm this information were destroyed in WW2 bombing.

Of the Lancashire Fusiliers, an old and respected regiment, it had been said, “Nothing can stop this astonishing infantry.” In Gallipoli, 1916, despite heavy losses, the Fusiliers had secured their landing site with formidable bravery. “Six VCs [Victoria Crosses] before breakfast!” was the boast of Lancashire. But the Home regiments had not been as well-trained or equipped as the regular and enlisted troops. The Infantry was desperate for replacement soldiers and so the Home regiments were called up. Stanley became a Private in the Infantry, and assigned the lifetime Regimental Number 242262. His Home battalion was joined with the 66th Division of the 197th Infantry Brigade. After training at Colchester, England, Stanley and his fellow Lancashire Fusiliers 2/6 Battalion embarked from Southampton on the S.S. Connaught, and landed at Le Havre in France in February, 1917.

In 1917, the Germans held many Belgian and French towns and villages, such as Passchendaele, Lille and Arras. The German army had swept across Belgium and into France in a bloody invasion in 1914 before its advance was brought to a halt. The objective of the Allied forces, including the Fusiliers, was to push the Germans backwards at the Western Front, and return the occupied territory to the French and Belgians. But for years the British, the Canadians and other Allies had battled to progress a few metres, gaining and losing these metres several times over. It was a stalemate, punctuated by horrific battles such as the First and Second Ypres battles, the battle at Loos, and the offensive at the Somme. Deaths numbered thousands. Poison gas was first used in the war at the Second Battle of Ypres, and thereafter soldiers were equipped with gas masks they had to don in seconds when the gas warning flares were sent up.

Before Stanley’s arrival, the trenches at the Front flooded with water over a foot deep because the natural stream courses had been destroyed by years of artillery shelling. Soldiers plodded through thick muck trying to evade the deep flooded pockets yet diving into them when exploding shells and bullets came too close. Their food rations, ‘bully,’ was contaminated with mud; flies, lice and rats were everywhere. Trenchfoot was a common complaint–a result of wearing wet boots for days on end. It caused feet to swell, then lose sensation and finally cripple its victim with searing pain.

A Company would spend two to ten days at the Front, engaging in skirmishes and raids to repel the enemy, trying to move forward across No-Man’s Land to breach barbed wire defences, or to capture or destroy the enemy’s trenches and weapons. Sometimes the objective was to keep the enemy occupied while a larger battle was in progress elsewhere, so that reinforcements could not move to support enemy troops. After a Company became exhausted or their numbers were decimated, they would drop back to rest in a billet such as a farmer’s outbuilding or a camp near a village while another Company moved forward to relieve them. Much time was also spent shoring up the trenches, digging new ones, and repairing equipment.

By March 2, 1917, Stanley and the 2/6 Battalion had travelled by train from Le Havre to Thiennes and were billeted in Boeseghem. The battalion marched from Boeseghem to Paradis with the other three battalions of the 197th Infantry Brigade, a distance of 16 kilometres. Twenty men dropped out because of sore feet. Two days later they were on the march again for six kilometres from Paradis to Bethune. This time only one soldier fell out. The battalion remained in Bethune until March 15th.

Another march: this time to Gorre, four kilometres away. The men were billeted at Chateau Gorre. Now the battalion was ready for some front line experience. They were sent forward for five days in Givenchy sector to Givenchy Left (Canadian Orchard to Barnton South) trench.

Stanley wrote his postcards to his family from the trenches. To his sister Gladys he wrote:

Am at present in the trenches, the weather [h]as been fine the last couple of days and if it continues no doubt it will be pretty hot. I received the 10/- also last letter but the parcel has not arrived yet. Probably I shall get it tomorrow. Am writing to Jack tonight. What do you think of U.S.A.  We manage to get papers two days late for 2 d/. French women are up to all kinds of jobs and I rec’d [received] a haircut and shave for 4 d/. I call that cheap. Well I am sending you these trifles, but I cannot say who they are for as there is a little difference in the quality of them. However, they will do as presents from France.
Best love and wishes
Stan

And to his Mother:

Pretty quiet out here. Am at present on observation post; have just come from the rest camp (supposed to be). Well I will write you a long letter the weekend after sampling parcel. By the way we got issued out with mittens, scarfs etc. Made by some women’s club in England yesterday. I expect you will be spending Easter a bit different than out here.

Stanley’s message to Gladys references the entry of the United States into the war on April 6, 1917. This long awaited turn of events was greeted with relief by Allied soldiers, who hoped the Americans’ entry to the War would break the deadlock on the Front that had prevented any real progress for over two years, though thousands had died in this effort.

But the arrival of trained Americans and their equipment and munitions was many months away.

In his postcards, Stanley would not have been permitted to refer to the forthcoming major Spring offensive that was scheduled to begin the Monday that followed Easter. And no one knew that a late Spring storm would bring bone-chilling cold and snow flurries to the area. The battle came to be known as the Arras Offensive. There were early successes, and the battle went on for weeks but the Allies could not make significant advances. The notable exception: the Canadian troops, at great human cost, were able to break through the German lines at Vimy during this offensive.

In the meantime, Stanley’s battalion was increasingly exposed to battle, casualties, gas and death, a change from the construction and repair activities they had first been assigned. Their tour took them to Cover Trench/Barnton South at the end of April. In May the battalion had settled into a rotation with the 3/5 Battalion of the Fusiliers, alternating defence of the Sector Road/ Barnton Road trench. Four men were killed at Windy Corner in a gas attack.

Weather conditions improved in May, and allowed the 2/6 to repair the trenches. In the war diary the Battalion commander wrote:

Enemy artillery has been less active, and the minenwarfer [mine launcher] which paid us such attention last month has transferred his affections elsewhere.

On June 4, 1917, Stanley’s D Company left Gorre for Les Cauldrons for special training, possibly in hand-to-hand combat using bayonets and hand guns, which would be essential skills in dangerous forthcoming trench raids. By June 11th all Companies in the battalion were on the front line. D Company carried out a raid of the enemy trenches opposite Right Cover Trench and 16 Island. The raid was preceded by several days of artillery in an attempt to break through forty feet of wire between the first and second enemy trenches. The battalion received heavy enemy bombardment with gas, but managed to penetrate the enemy’s first line and get to an enemy supply trench which they held for 45 minutes.

This was considered a very successful operation. The raid coincided with the Battle of Messines, which was taking place in the Ypres Salient (a salient is a “bulge” in the line) on the northern Front the same week. It is likely the activities of Stanley’s battalion were intended to harrass the enemy and prevent the Germans from moving troops to reinforce Messines. Subsequently, five military medals were awarded to members of Stanley’s battalion.

The cost of this diversion was the lives of twelve men. Dying instantly from a sniper’s bullet, Stanley was one of them. He was not yet twenty years old.

Their worst fears realized, Stanley’s parents and siblings were devastated by the news, which they received by telegram.  Stanley’s death was announced in the local newspaper and church bulletin.

He was buried in France close to where he died. Eventually a permanent marker was erected in Brown’s Road Military Cemetery, located near Festubert, Pas de Calais, France. His final grave, like those of all fallen WW1 soldiers, known and unknown, is cared for by the British War Graves Commission, and the land has been ceded by the French to the British in perpetuity.

Stanley was awarded two medals : the British War Medal and the Victory Medal. These were sent to his parents and passed to his sister Gladys, who gave them to Stanley’s nephew, William Lewis.

King George V sent this memorial card and flag to the families of British soldiers who died in the Great War. 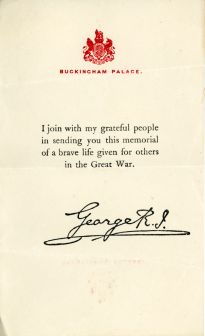 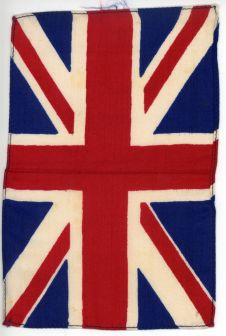 In 1928, Gladys visited Stanley’s grave in France, bringing some closure to her and her parents. A memorial was erected at Mossley Hill church in Liverpool to honour all church members who lost their lives in the Great War. Another memorial is mounted in the Liverpool Town Hall. Stanley’s name is inscribed on these, and in a memorial book entitled Men of Garston.

Today Stanley remains peacefully at rest in Brown’s Road Military Cemetery, Grave Reference III. A. 15. From the church in Festubert, take the D166 signposted Cuinchy. After 300 metres turn right. The cemetery is 300 metres further on the right hand side.